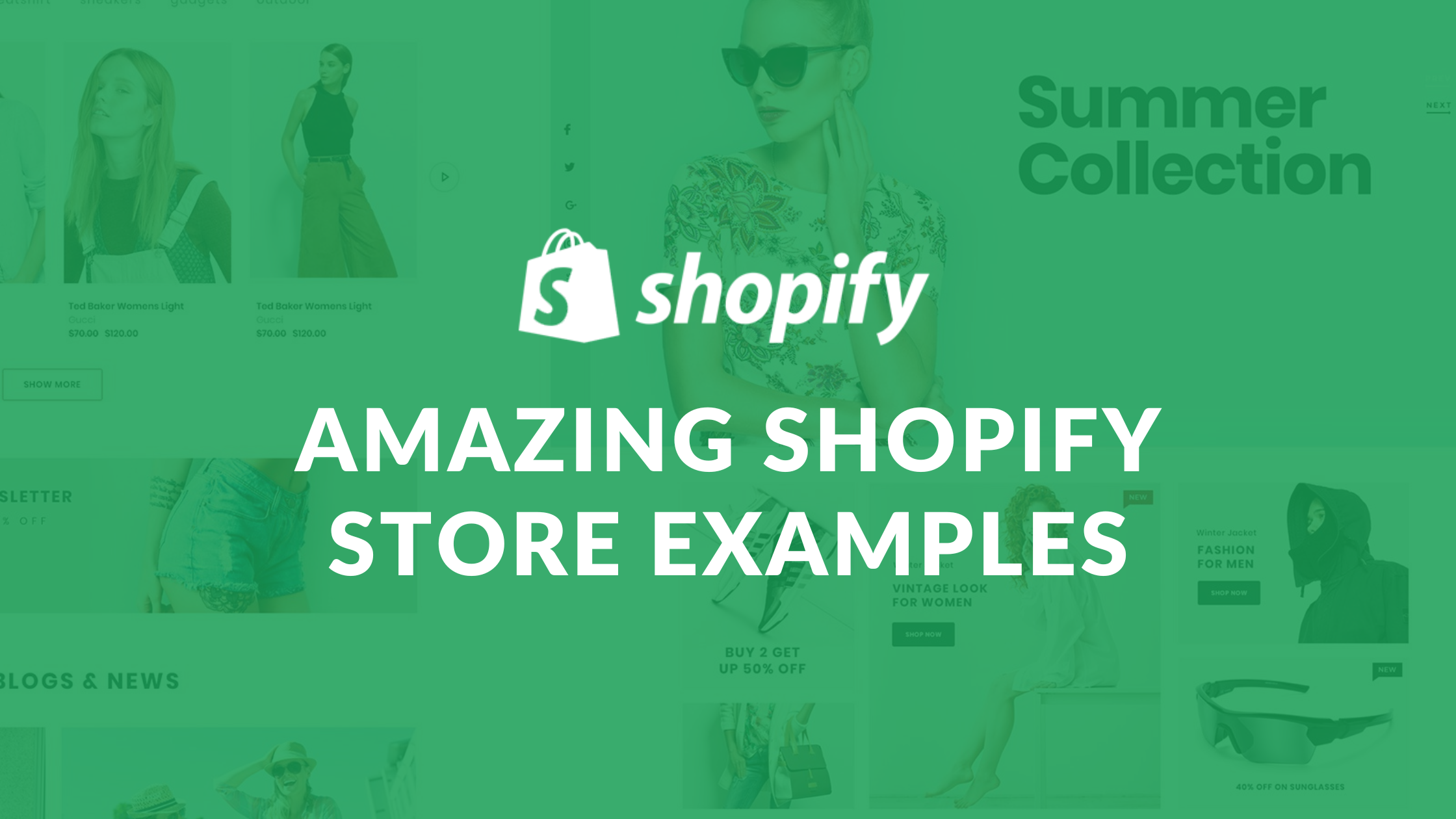 Running an eCommerce store can be extraordinarily tough due to the fierce compeititon new brands face. One of the best ways to succeed with your eCommerce store is by differentiating your website and overall store layout. However, if you use a major eCommerce platform like Shopify, creating an original store can be quite daunting. That’s why Blogging Guide put together this list of amazing Shopify store examples. To help inspire creators and help them stand out in an ever crowded eCommerce field. 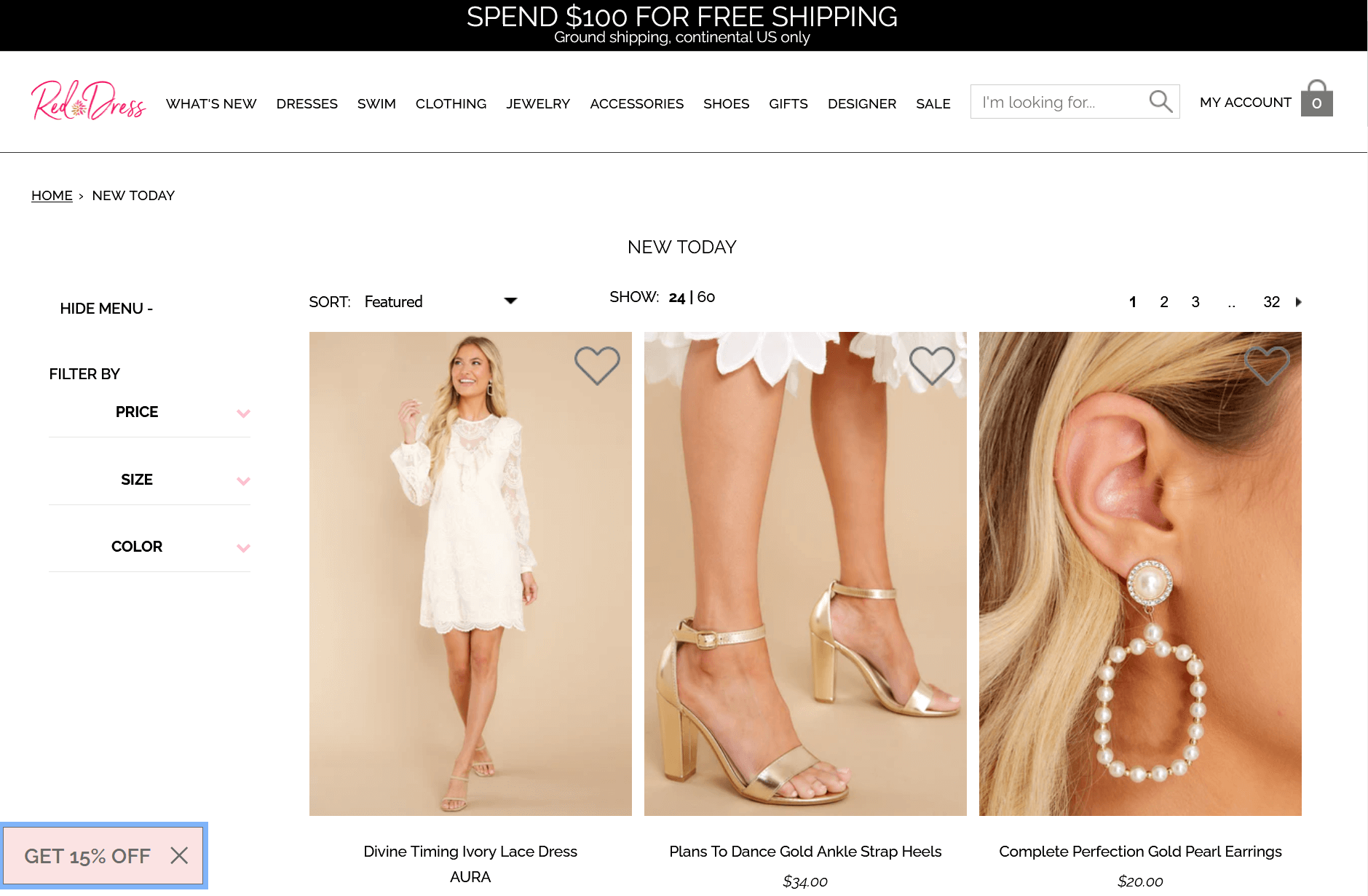 Red Dress Boutique is a women’s clothing store based in Athens, Georgia. The US retailer offers a wide variety of clothing, footwear, and fashion accessories. The company got a jumpstart on an episode of Shark Tank in 2014 when Mark Cuban invested $600,000 to purchase 15% of the company.

When Shark Tank producers caught up with Diana and Josh on an episode of “Beyond the Tank” in 2015, the couple struggled to convince Cuban why they needed a brand-new website.

Cuban and his advisors argued that Red Dress Boutique could save big bucks by improving and rehabbing their existing site, but its founders weren’t so sure. On that show, the pair decided to ignore Cuban’s advice and go forth with the new site.

“It’s going to take you forever to get that right, it’s just the nature of technology,” Cuban said in the special.

However, Diane and Josh ultimately decided to build a brand new custom site. And while it did take 2 years, the Red Dress Boutique Shopify store is among the most successful on the entire platform.

What are some of the things that helped Red Dress make their site stand out visually, while also collecting the right customer data?

Welcome Pop-Up / Lead Magnet. Immediately after the site loads, visitors will see a well designed welcome pop-up form offering shoppers 15% off their first purchase if you sign up for their email list. Email marketing remains one of the most lucrative forms of digital marketing and helps ensure that casual shoppers can be sent targeted promotions in the future, even if they don’t return to the site. The form follows the traditional advice of high converting lead magnets, and is incredibly simple, includes custom branding, offers clear value, and perhaps most importantly, it only asks for one piece of information (shopper’s email address). 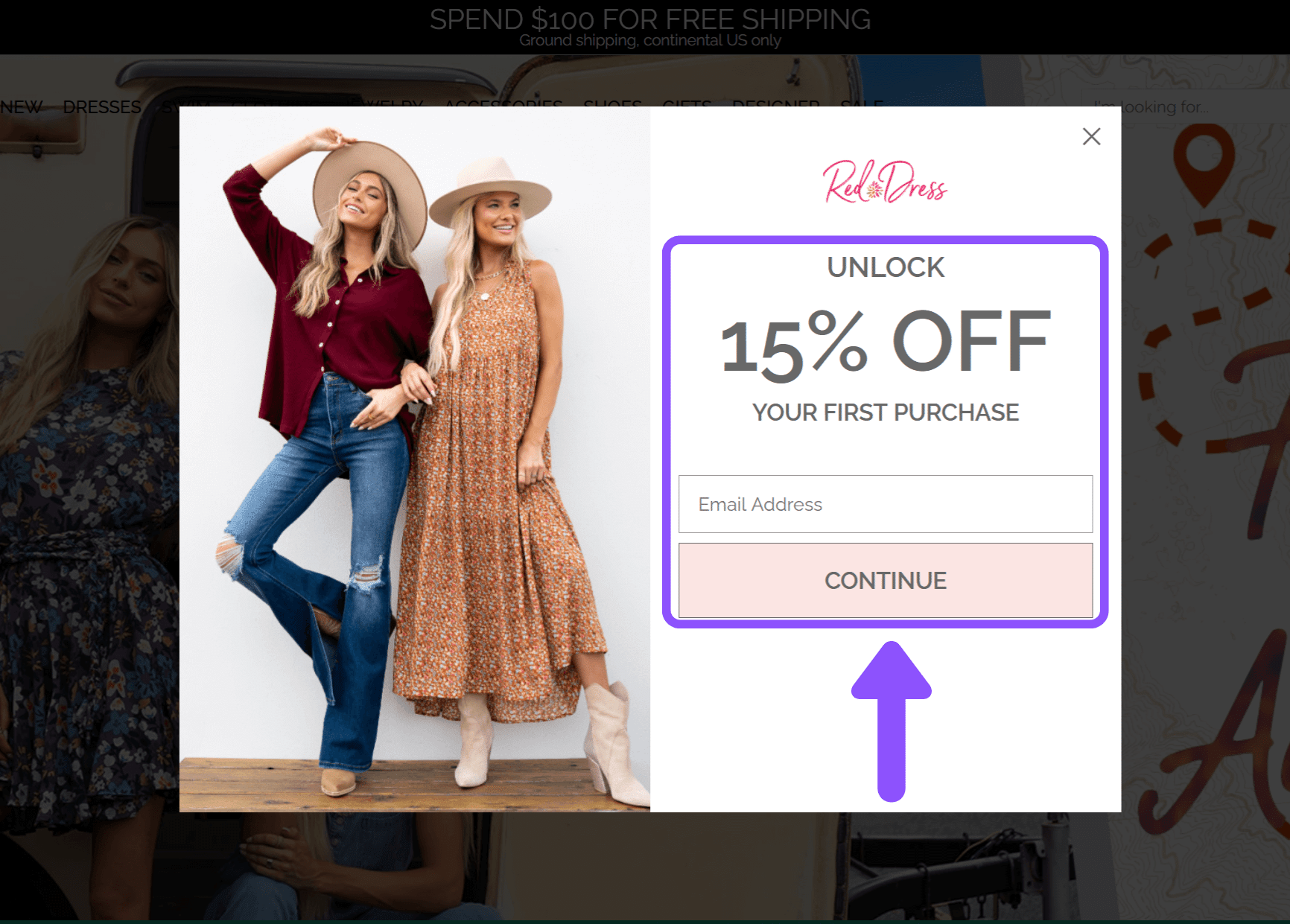 Visually Stunning Header Section. One of the first details that visitors to Red Dress notice is the site’s custom header section which contains beautiful and custom designed imagery. This imagery looks stunning and is properly formatted so that it displays as a high quality full screen image:

Custom “Shop the Look” Section. Red Dress Boutique is the only ecommerce site to offer the ability to buy an entire outfit in one easy click with ‘Shop the Look.’

By clicking on any outfit, shoppers can easily add specific parts of that outfit to their cart, or even the entire outfit. This not only makes for a fantastic user experience, but it encourages each customer to spend more on each purchase: 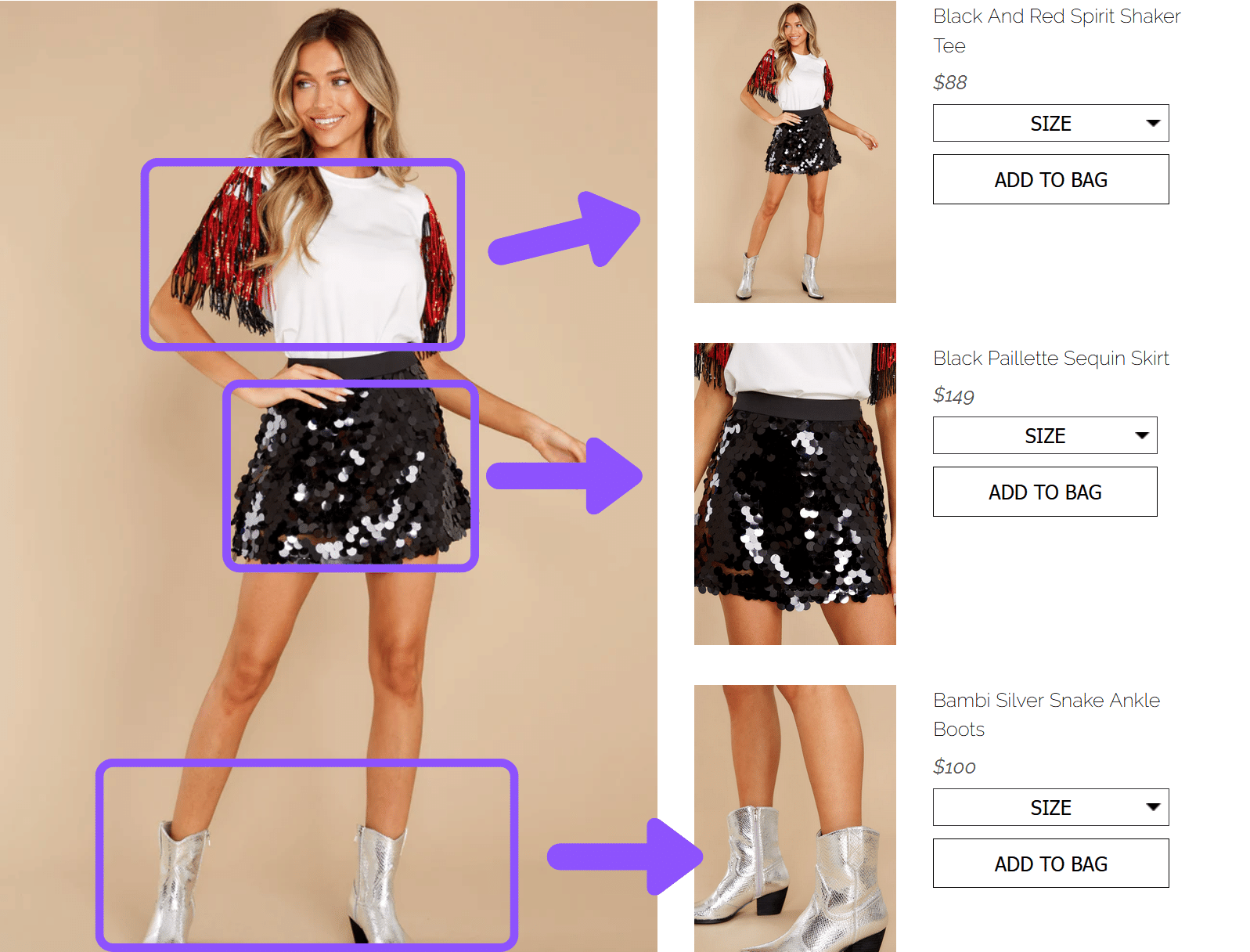 Well Organized Drop Down Menu. Red Dress makes it easy to navigate their site, through their use of a well thought out and carefully organized “mega menu” which contains custom pages, sections, and collections, using both text links and images. This is a feature that is rarely seen on other Shopify stores, and really makes the site look professional. 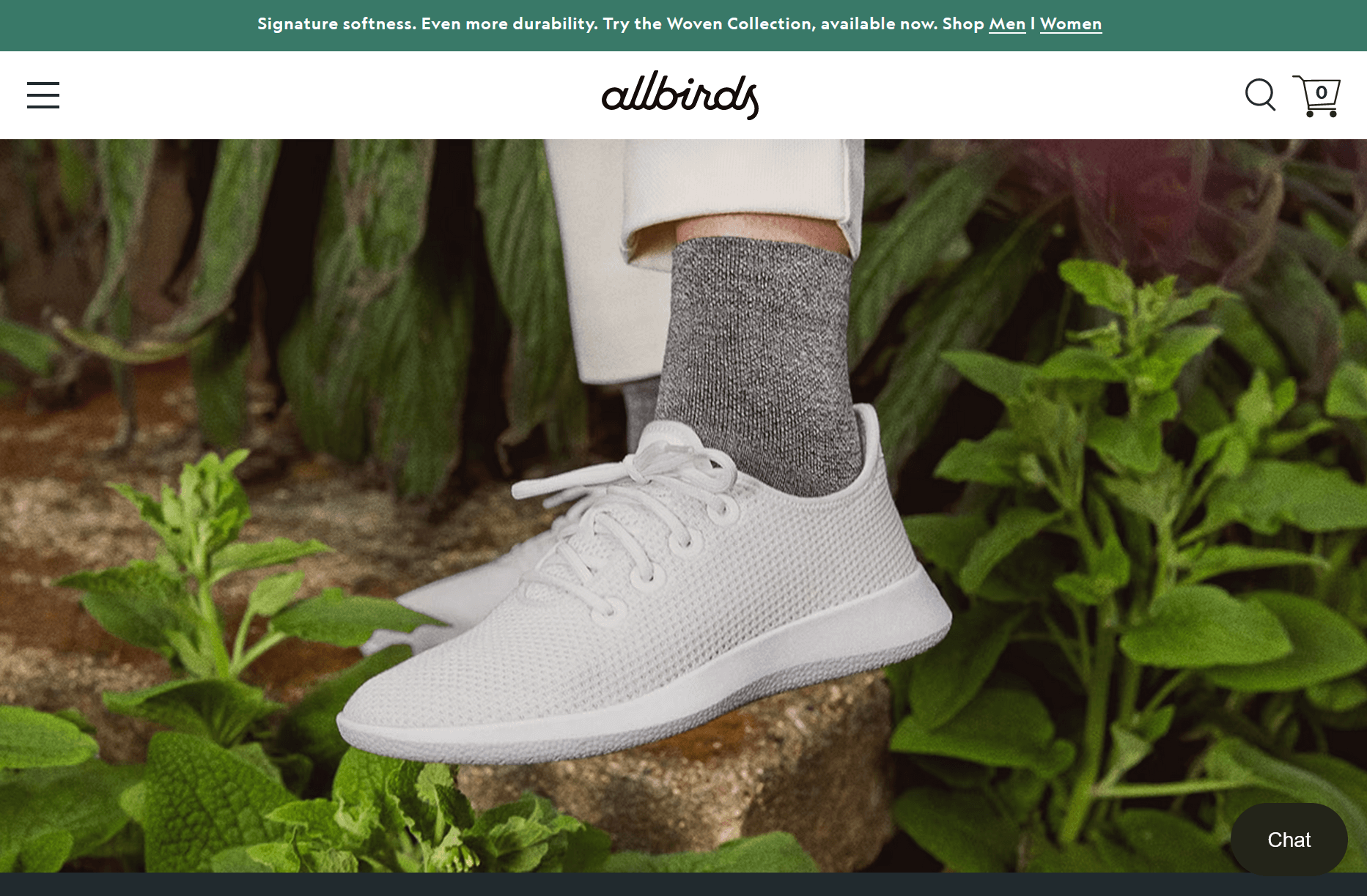 Founded by footballer Tim Brown and engineer Zoey Zwillnger, Allbirds is an e-commerce store combining comfort, style, and sustainability. The site features an easy-to-navigate layout with a personal feel throughout. The Shopify store emphasizes the brand’s use of natural, sustainable materials, and you’ll be able to find plenty of information on how the company acts as a force for good.

The blog includes some fascinating stories about Allbirds and upcoming collaborations (for example, with Adidas), which are a brilliant way to get visitors inspired and excited about new releases.

Welcome Pop-Up / Lead Magnet. Immediately after the site loads, visitors will see a well designed welcome pop-up form offering shoppers 15% off their first purchase if you sign up for their email list. Email marketing remains one of the most lucrative forms of digital marketing and helps ensure that casual shoppers can be sent targeted promotions in the future, even if they don’t return to the site. The form follows the traditional advice of high converting lead magnets, and is incredibly simple, includes custom branding, offers clear value, and perhaps most importantly, it only asks for one piece of information (shopper’s email address). 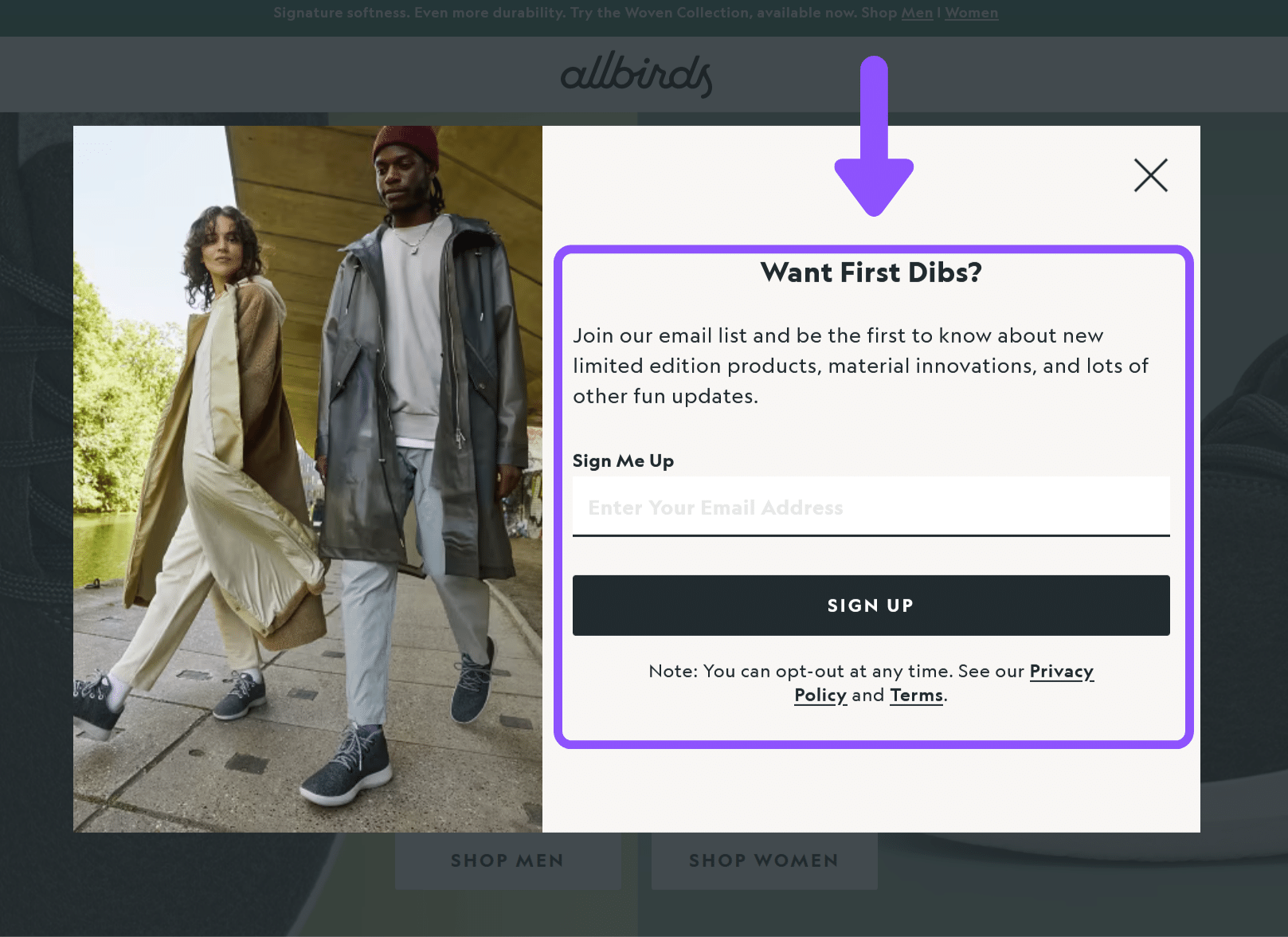 Custom Map Section. Allbirds is unique when compared to many Shopify stores, in that it actually has a number of retail locations. So their use of a custom map widget is a great way to add some visual flair to the site! 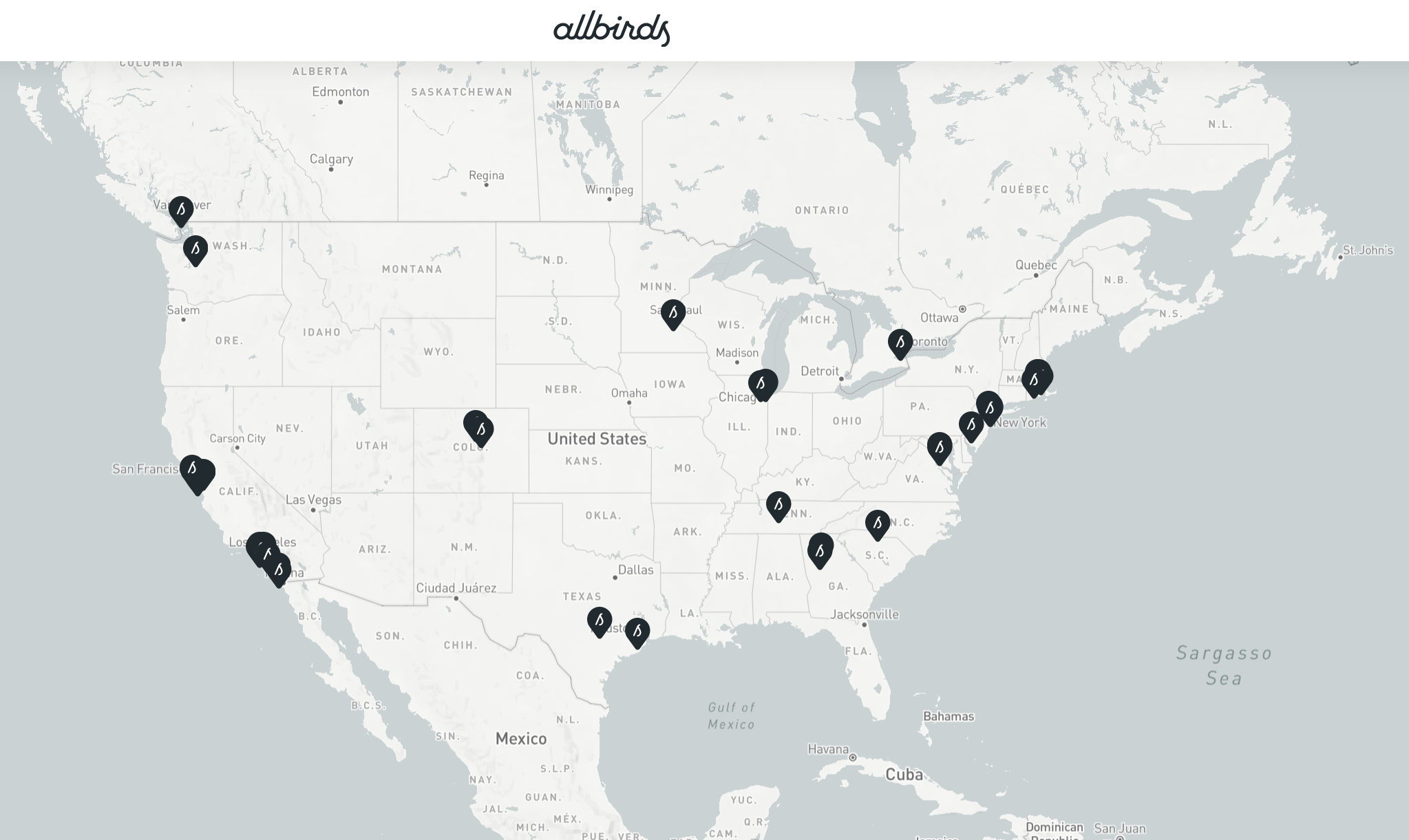 Excellent Sections Promoting Top Product Picks. Allbirds does a great job narrowing their selection down to a few key (and presumably, high converting) products, in their custom section. Each product can be viewed for men or women with just the hover of a user’s mouse, making the choices seem even more straightforward. 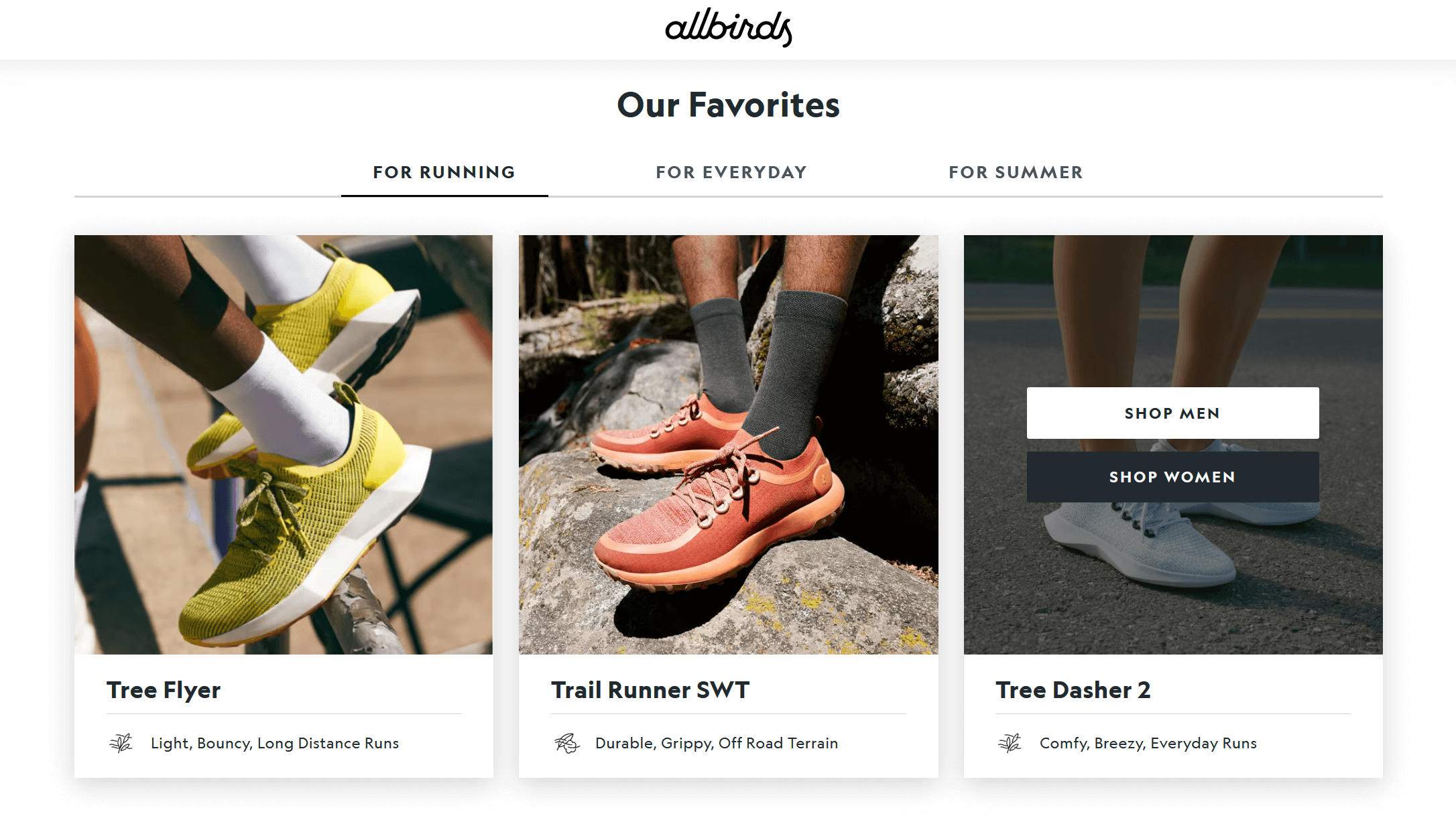 Custom and Well Written “About Us Page. Allbirds has a well thought out, and clearly custom, “About Us” page, full of videos and a detailed history of the company’s origin. 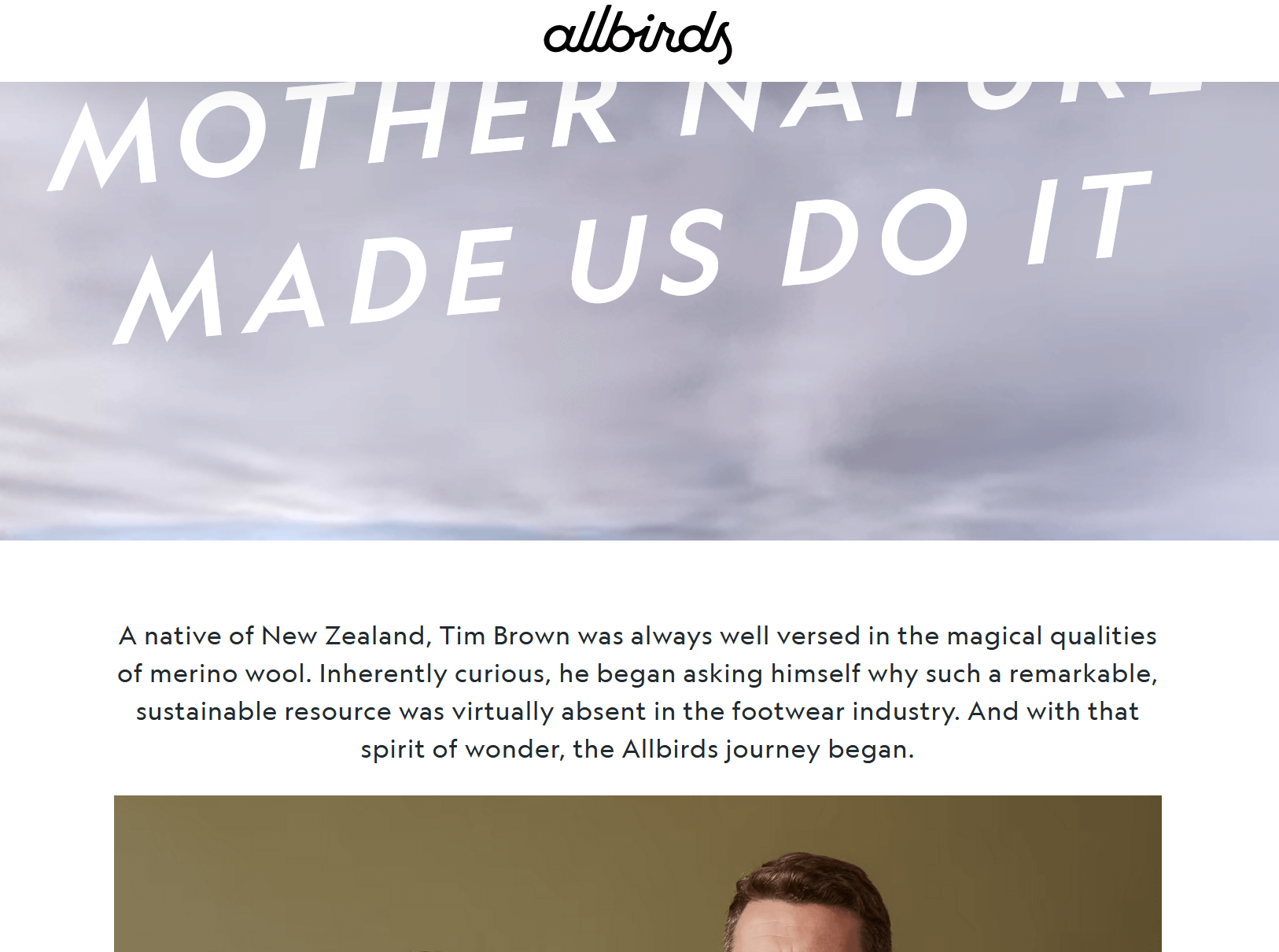 Custom Materials Sections. Allbirds’ homepage contains a detailed section about the materials they use. While this type of section might normally consist of boring text copy, Allbirds has found a way to make even the product materials visually appealing, by incorporating flat lay photos of each assortment of materials. 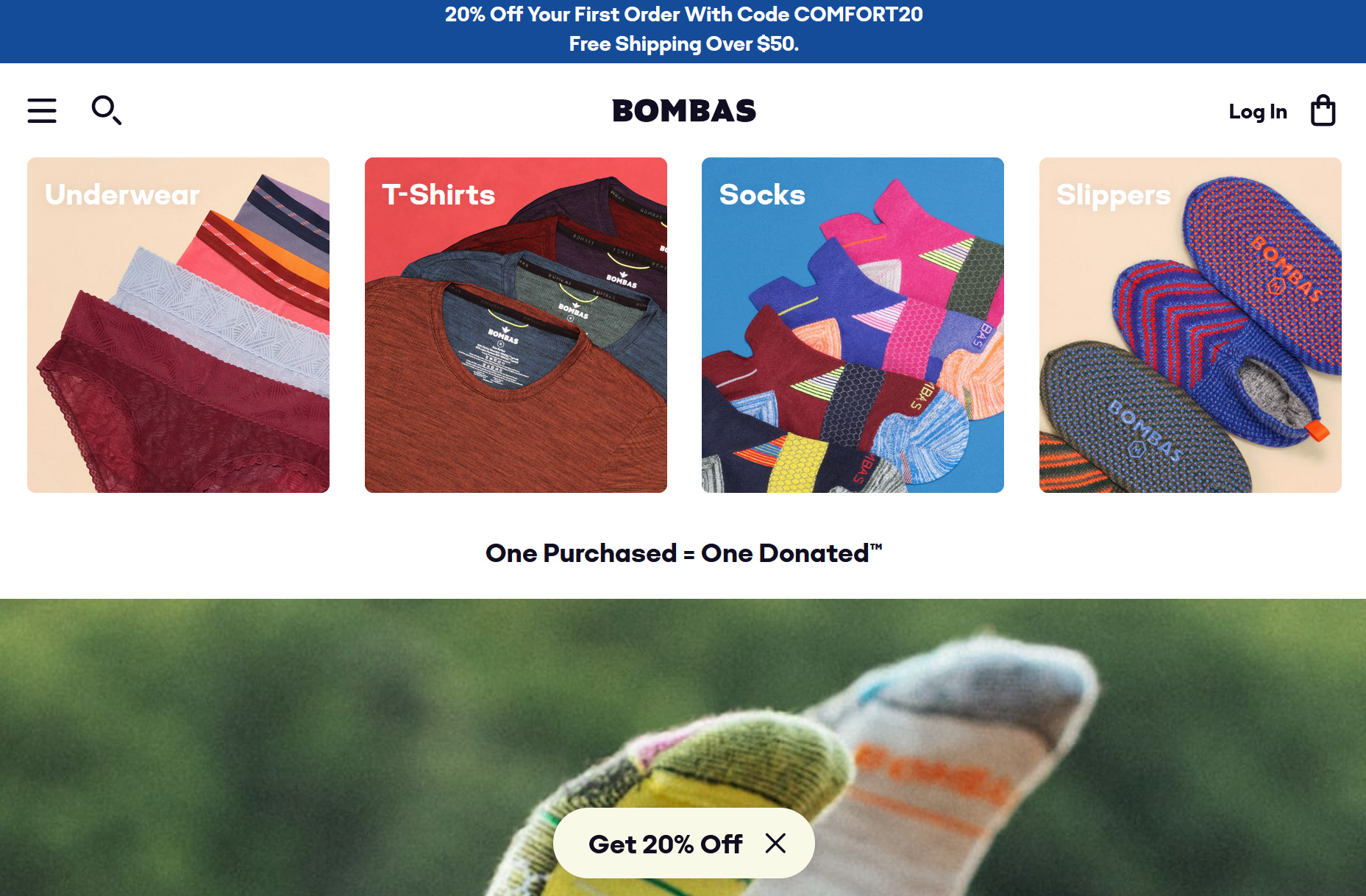 If you’re looking for inspiration for designing a colorful Shopify store, check out Bombas. This cool website has a vibrant color palette, clear navigation, and plenty of engagement opportunities for visitors.

Mission Driven Company / Social Proof Section. The banner “One purchased = one donated” just below the product menu hints that Bombas is a brand that helps those in need. Scroll down a bit on the homepage and you’ll see that the company donated 50+ million items! 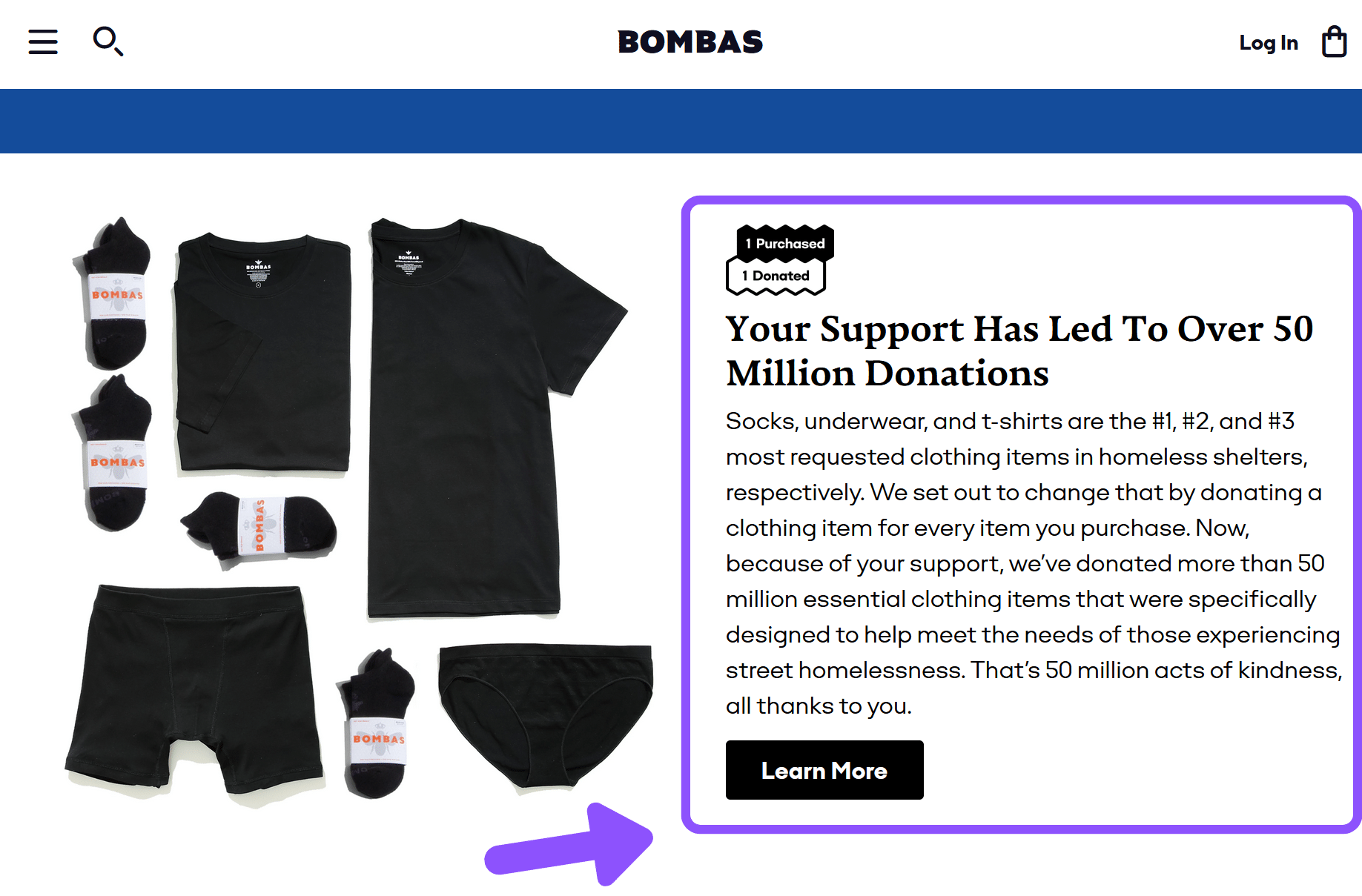 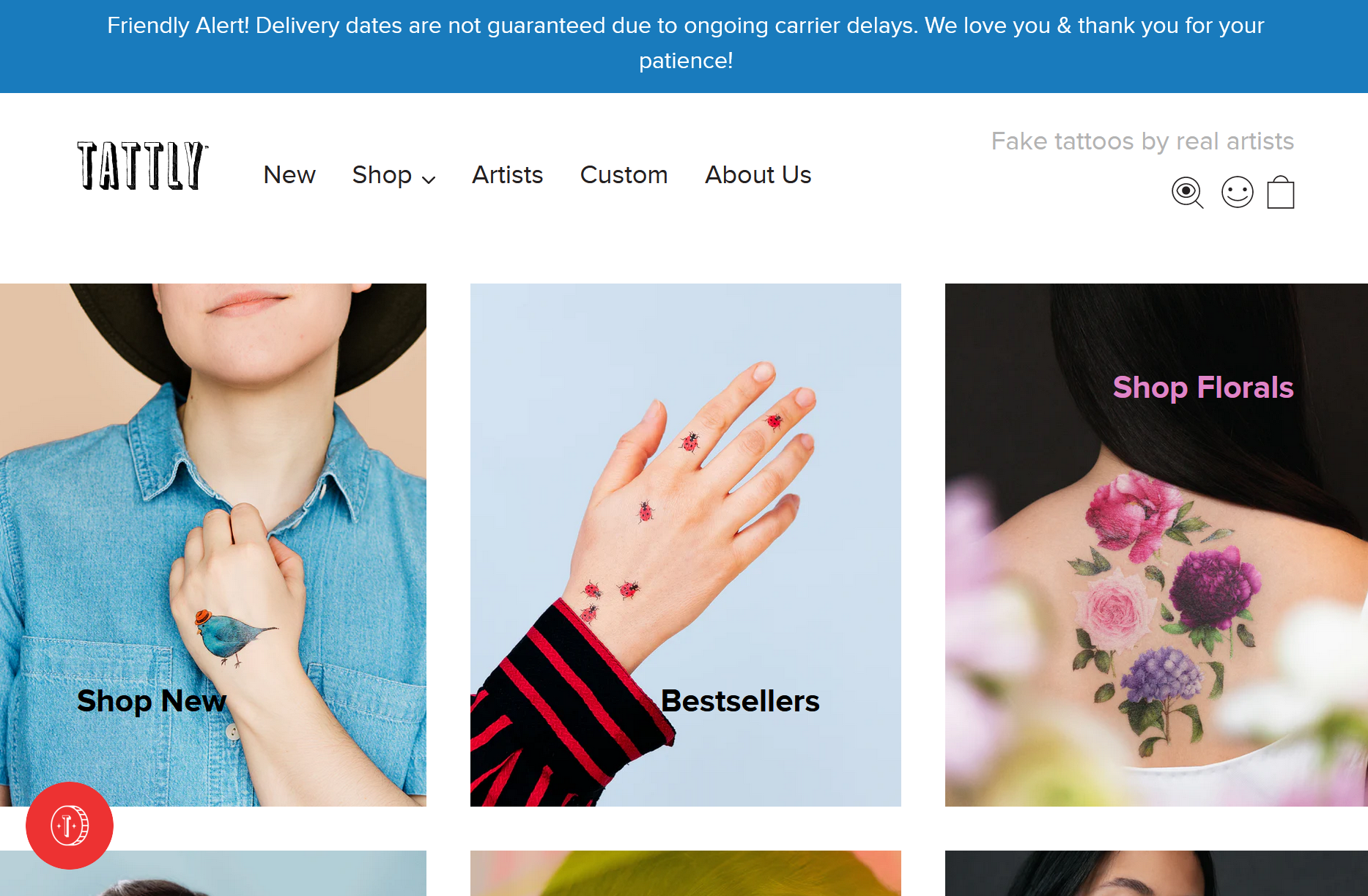 Tattly is a rising brand devoted to creating temporary tattoos. They have plenty of design options and an extensive team of artists constantly producing fun and playful tattoos for both children and adults.

The informal typography on their website matches the brand’s aesthetics, and the homepage introduces a lot of products and categories right upfront for a seamless user experience.

Custom Animated Pop-Up. While many of the Shopify stores featured in this article have pop-ups, few have a customized and animated 3/4 of a page pop-up with small colorful dots that move toward your cursor. This form almost gamifies the sign up experience! 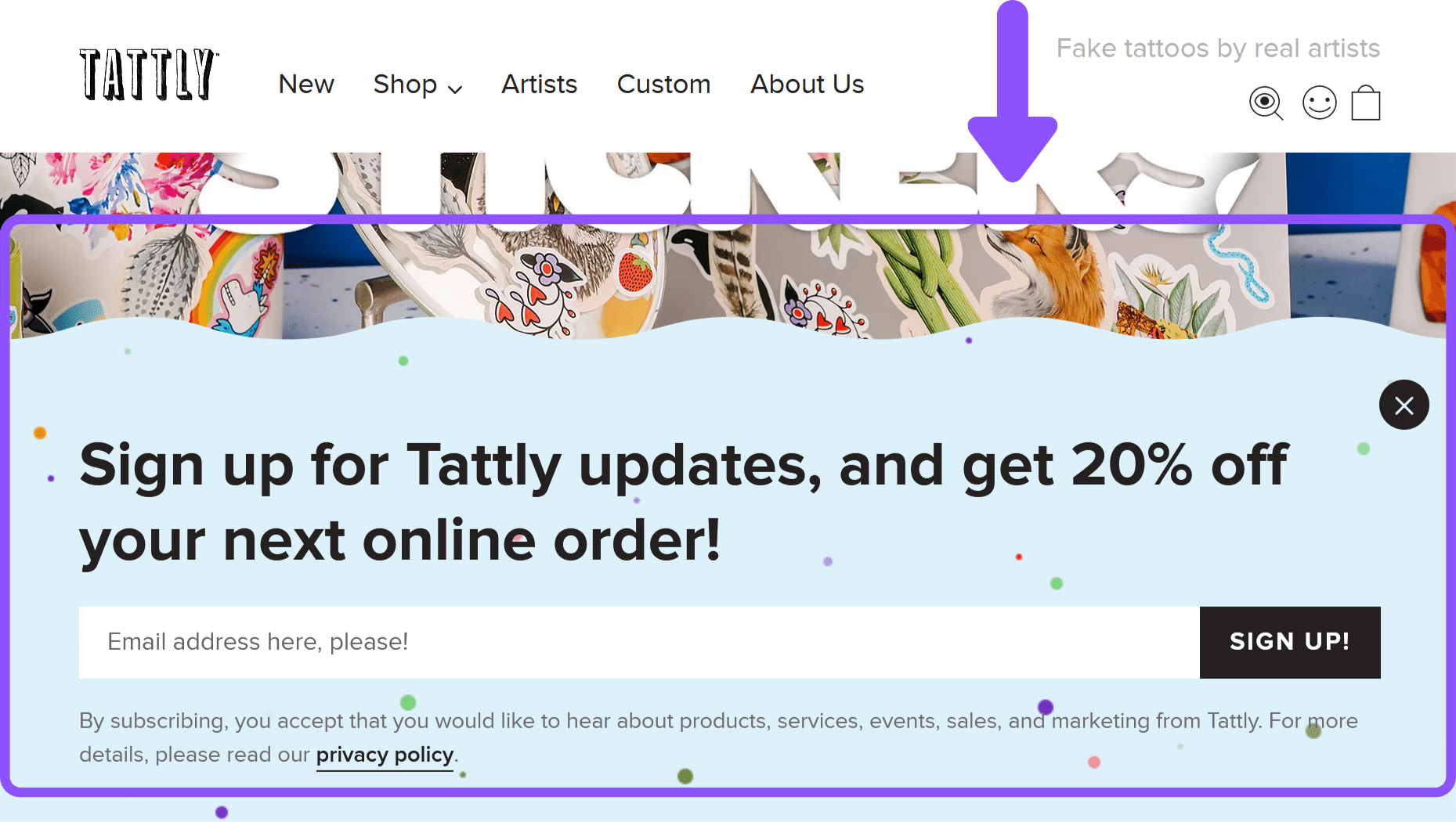 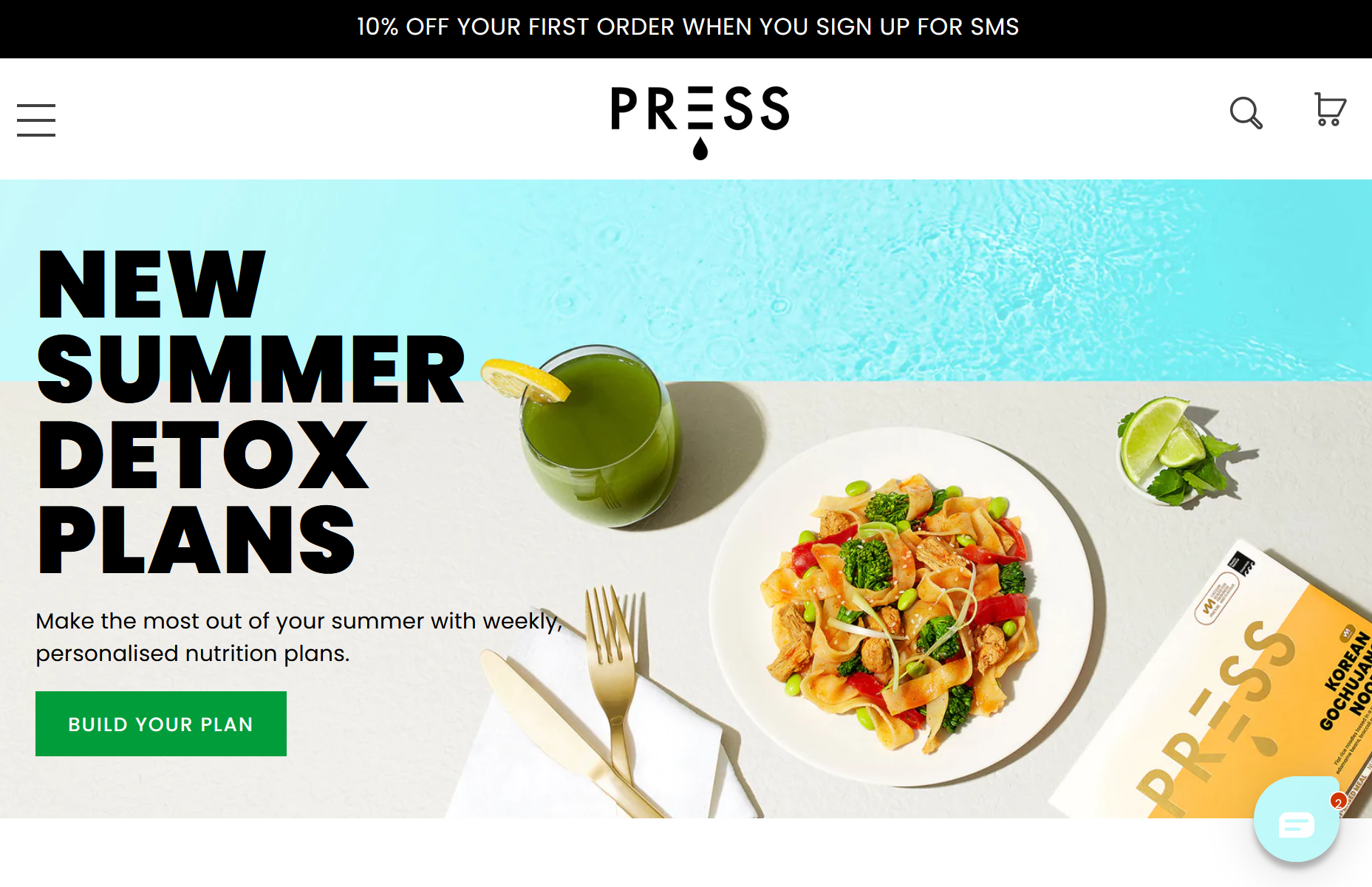 PRESS Healthfoods sells juices, juice cleanses and other healthy foods made from materials supplied by G.A.P. certified farms. Georgie and Ed, the founders, say they are on the mission to become the biggest health food brand in the world.

Their Shopify store is helping them reach this bold goal. The homepage has many (but not too many) CTAs along with client testimonials and product benefits to convert visitors. Definitely one of the best conversion-optimized Shopify sites out there.

One of the best features is the testimonials and social proof section, seen further down on the home page:

Endorsement / Client Testimonials. While many of the Shopify stores have some form of endorsements or shopper testimonials, few have both like PRESS Healthfoods does. The integration of Trustpilot reviews directly beneath the media publication that they have been featured in, is a very powerful form of social proof! 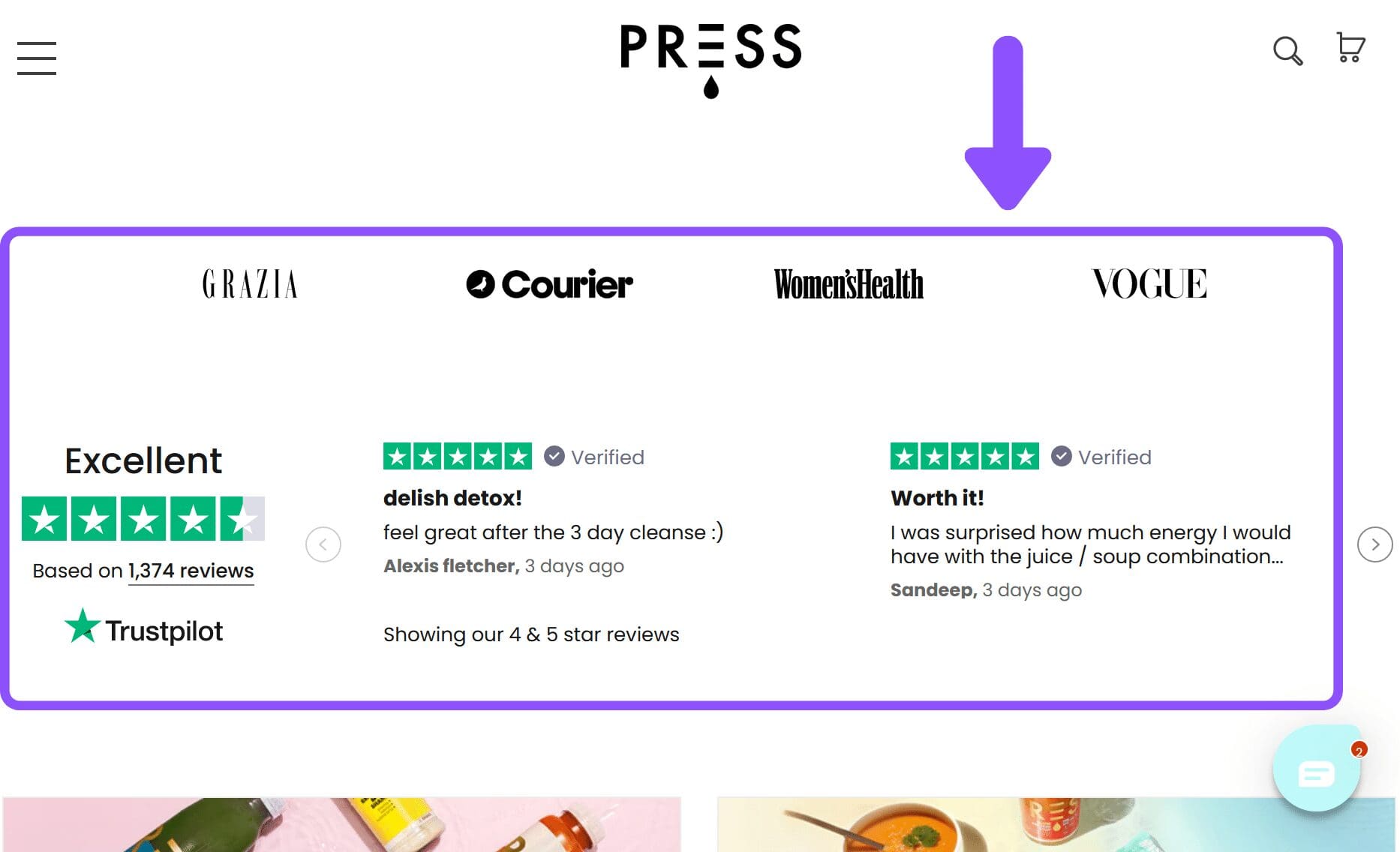 I hope you found this article showcasing amazing Shopify store examples, useful! Brand differentiation is critical in eCommerce and especially important when using popular platforms such as Shopify, which can feel fairly uniform. 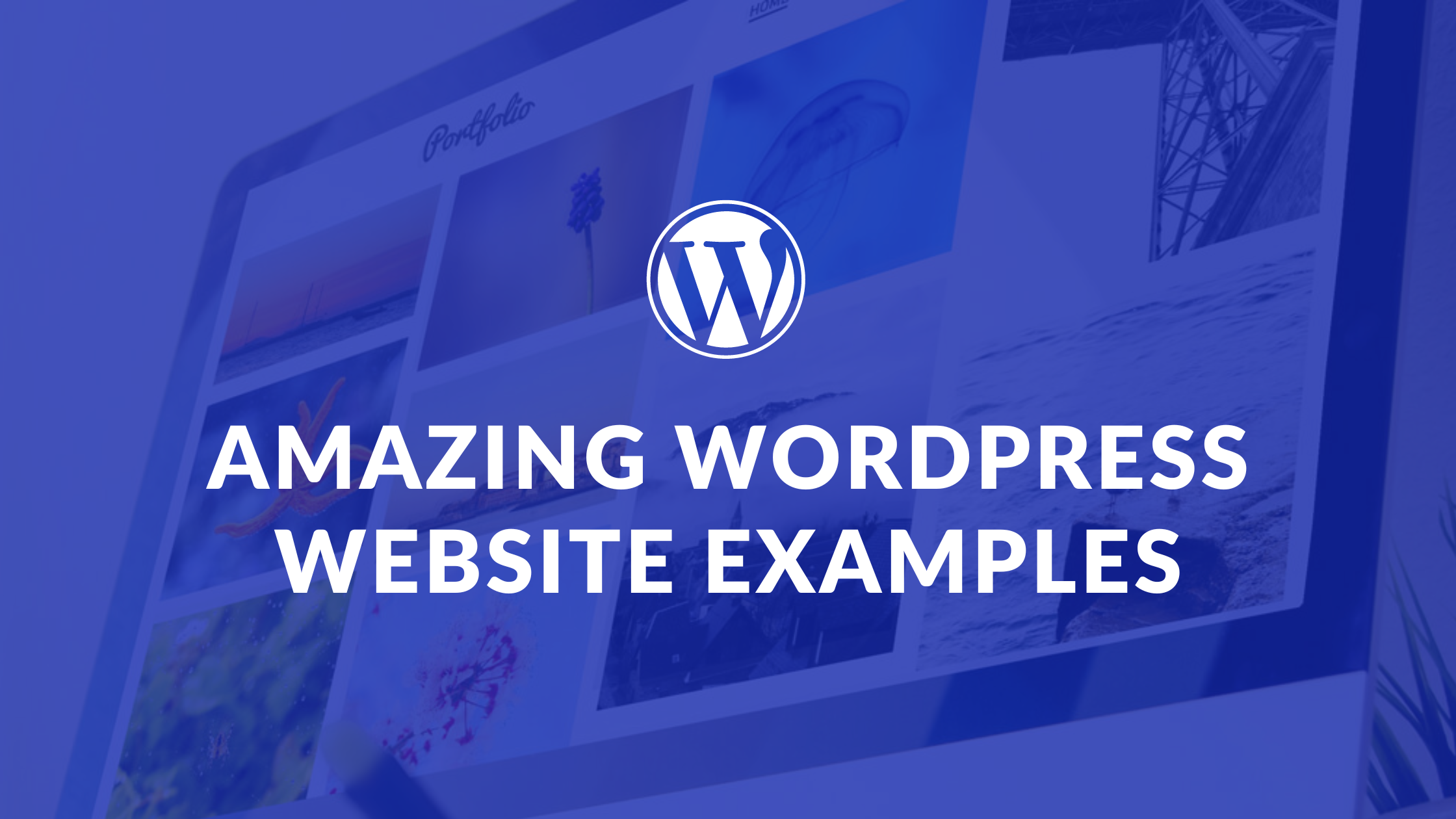